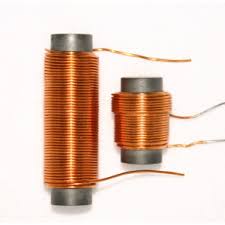 An inductor, also called a coil or reactor, is a passive two-terminal electrical component which resists changes in electric current passing through it. It is just a coil of wire around some kind of core. Energy is stored in a magnetic field in the coil as long as current flows. The inductor is a wire shaped so that the magnetic field will be much stronger. When the current flowing through an inductor changes, the time-varying magnetic field induces a voltage in the conductor, according to Faraday’s law of electromagnetic induction. The reason an inductor works the way it does is because of this magnetic field. This field does some magic physics stuff that resists alternating currents.