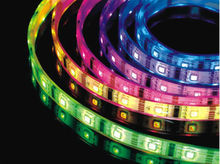 A light-emitting diode (also known as LED) is a two-lead semiconductor light source. When a suitable voltage is applied to the leads, electrons are able to recombine with electron holes within the device, releasing energy in the form of photons. This effect is called electroluminescence, and the color of the light is determined by the energy band gap of the semiconductor. There are a few different LED types. Here we give a brief introduction about LED color.

Single color: A single color LED means one color only. The color of the light is usually reflected in the color of the plastic housing, but not always. It is powered by connecting the positive voltage terminal to the anode and the negative to the cathode. An LED should always have a current limiting resistor. The most common single-color LEDs are: red, orange, yellow, green, blue, white.

Multi-color: A multi-color LED is actually capable of generating many colors (more than one) within itself. The most common LED is known as RGB LEDs which involves red, green and blue color. This technology is well used by the motherboard manufacturer, to show the power indication. For example, red means lower power than the recommended rating while green means full power.