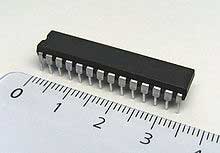 There are many types of microcontroller available on the market. Some are easier to use than others. There are 8-bit, 16-bit and 32-bit microcontrollers available. The simplest microcontrollers are 8-bit. PIC microcontroller is one of the easiest 8-bit types for hobbyists and beginners to use. PIC is a family of modified Harvard architecture microcontrollers made by Microchip Technology, derived from the PIC1650 originally developed by General Instrument's Microelectronics Division. The name PIC initially referred to Peripheral Interface Controller. The first parts of the family were available in 1976. Early models of PIC had read-only memory for program storage. All current models use Flash memory for program storage, and newer models allow the PIC to reprogram itself. PIC devices are popular with both industrial developers and hobbyists due to their low cost, wide availability, large user base, extensive collection of application notes, available of low cost or free development tools, serial programming, and re-programmable Flash-memory capability.