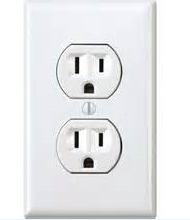 A short circuit in an electrical outlet occurs if the bare metal of a hot wire touches the bare metal of the neutral or the ground wire. While referred to as a short in an outlet, it often occurs in the wires behind the circuit.

Short circuits are low-resistance connections in a circuit. Normally, the electricity has a resistance load, such as a light bulb or motor to slow the flow of energy. Without the load, electricity flows rapidly, creating enough heat to ignite nearby combustible materials.

A warm outlet cover is a sign of a potential short. Noises, such as buzzing sounds or pops, indicate a problem. Due to the energy draw of the short, lights on the same circuit flicker or dim. As the plastic insulation warms or nearby materials start to char from the heat, a burning smell can be smelled. Circuit breakers protect the home from danger by turning off the power to the outlet. In one word, a short circuit in an electrical outlet requires immediate attention.